When Education Secretary Betsy DeVos proposed Title IX rules in November that would dramatically change how universities and K-12 school districts handle sexual misconduct cases, they were largely seen as favoring schools and students accused of sexual assault over survivors. That’s because they restrict the ways in which schools can investigate allegations, require schools to release more information to students involved in the cases, and would subject students to in-person questioning by lawyers.

But schools say these changes would actually create major problems for them.

By Bustle’s count, more than 70 national school associations, which collectively represent tens of thousands of K-12 schools and colleges, have urged DeVos to scrap or significantly change her Title IX overhaul. They argued in letters sent to the U.S. Education Department in January that the government is imposing a “one-size-fits-all, factory-like” process on them that will increase their costs. Schools say these changes would conflict with state laws, make it harder to investigate cases of sexual misconduct, and result in an increase in lawsuits from both accusers and the accused. Even another Trump administration agency voiced concerns about the cost of the proposed regulations, according to a letter obtained by Bustle.

Jerry Falwell, Jr., a staunch Donald Trump ally and president of the evangelical Christian school Liberty University, also urged DeVos to “withdraw or substantively revise” major chunks of the proposed regulations because of how much he believes they would hamstring schools.

“The proposed rule concludes that due process can only be achieved through an adversarial trial process. This is a terribly misinformed and narrow view,” he wrote in a letter.

Falwell’s letter echoed the concerns of many other universities about how administrators will have to investigate sexual assault cases under DeVos’ proposal. He predicted fewer people would report sexual assaults because the proposed rules mandate that accusers, witnesses, and the accused all undergo cross-examination — possibly by attorneys — in live hearings for all Title IX cases. Falwell warned that schools will spend a fortune for those hearings, from the cost of setting up an expensive audio-visual system to paying to have a pool of trial lawyers on hand. He argued it’s often cheaper and more effective for schools to hire a single person to investigate sexual misconduct allegations and determine what happened, which is the way many workplaces handle these cases. But DeVos’ proposed rules would ban this type of process. 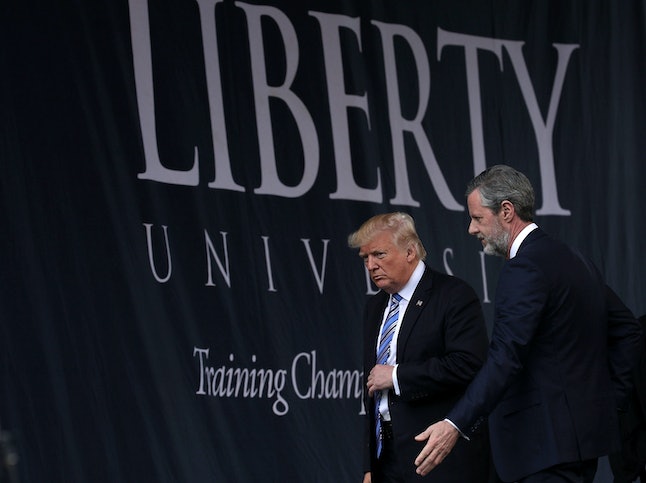 The Education Department said these new rules would save schools money by cutting down how many sexual misconduct cases they handle, but schools largely said in letters that they think DeVos has her numbers wrong. Another branch of the Trump administration seems to agree. The Small Business Administration stated in a February 15 letter to DeVos, obtained by Bustle, that her department did not properly consider the financial burden that the rule changes would impose on colleges and school districts, and said she should “reconsider the proposed rule.”

Peter Lake, director of the Center for Excellence in Higher Education Law and Policy, which provides training and conferences for attorneys working with schools, tells Bustle that very few university officials believe the bulk of the proposed regulations are tenable. But they are in agreement that they’d be expensive to implement, according to Lake. “Not everybody has the resources to really manage some of these things,” he said.

"There are few things on this planet more self-righteous than a university."

The public submitted more than 105,000 comments on the proposed regulations to the department between Nov. 29 and Jan. 29 (the comment period was reopened for one day on Feb. 15). Now the department will have to respond to all of the substantive criticisms, like Falwell’s, and post those responses online, before issuing the final rules. If the department doesn’t revise its proposal to address the concerns highlighted in the comments, it has to explain why not to the public.

It appears that fewer than one-third of the comments have been processed and posted online since the comment period closed more than a month ago, leading experts like S. Daniel Carter, a longtime campus safety consultant, to suspect that the department may not have the final version of the regulations ready for months — possibly not until 2020.

The near-universal opposition from schools may not convince DeVos’s team to scale back its Title IX plans. But one former senior Education Department official who worked in the Obama administration tells Bustle that the pushback from schools in red states like Indiana, Iowa, Texas, and Wyoming is likely to create a lot of tension for the agency.

Additionally, since some of the proposed regulations conflict with state laws on campus sexual assault, DeVos’ rule changes could be blocked in the courts by a coalition of Democratic state attorneys general who submitted their own extensive comments and are threatening to take legal action. While these attorneys general are likely in the best position to have standing to sue DeVos, it’s possible schools may take legal action as well, according to Lake. The comments submitted to the department essentially provide a roadmap for what would go into a lawsuit against it.

The Education Department did not respond to a request for comment from Bustle.

Under DeVos, department officials promised to be more friendly toward schools, who had repeatedly accused the Obama administration of imposing new mandates without seeking their input first. But now many of them are accusing DeVos of overreach. The proposed Title IX regulations introduce “an unprecedented amount of federal control when it comes to how to investigate and adjudicate allegations of sexual harassment,” the American Association of Universities, a coalition of elite universities, stated in a letter.

Groups like the American Council on Education, which represents college presidents, argued that DeVos went too far when the department proposed a new rule mandating that schools use the same standard of evidence to decide guilt in Title IX cases as they do for other student conduct violations. Schools argue that DeVos is essentially using Title IX to tell them what kind of evidentiary standard they must have for academic dishonesty cases, which the department doesn’t have the authority to do.

“Even institutions that have long worried about liability know that what the Department of Education is doing here is bad for their students, and bad for them because they’re losing their authority,” Lauren A. Khouri, an attorney who represents students in Title IX cases, tells Bustle.

Attorneys for accused students aren’t surprised that schools are objecting to the proposed rules, and say there is a pretty obvious reason for the pushback.

“There are few things on this planet more self-righteous than a university,” Justin Dillon, a Washington, D.C.-based lawyer who represents accused students and largely supports the proposed regulations, tells Bustle. “They don’t like being told what to do."